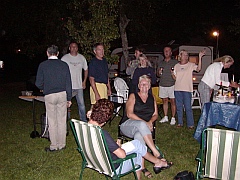 A gathering at our port. Great break from

the constant work onboard.

Shop lights hung from the trees and

people who had BBQs rolled them out. 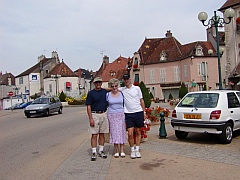 Out to lunch at Nuit St. George

We took them through the vineyards of 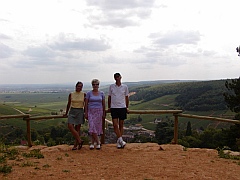 They had always been a bit reluctant

about travel to France. Not now! 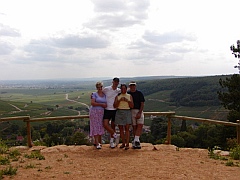 We had a great time, even not being able

to take them on a trip on JoLi'.

We had water on JoLi' by mid-august. Now, we're not talking water coming down from the sky or over the gunnels. We're

talking water coming from the taps in the sinks, and the shower, as well as flowing in the toilets!

Sailing friends we met while in Mexico came to visit for 6 weeks. They used us as a base for their trip to Europe. We had

hoped that we would be ready to go cruising, but sadly we didn't have the generator operational until the beginning of

September. We had water onboard by the beginning of August, but only cold. The boiler for hot water was up and running by the

We had to return our lease car the first week in August and managed to find a 1991 Volkswagen Golf Diesel by mid August.

A friend at the mooring saw the small advertisement at the tabac in town and told us about it. She knew we were looking for a

VW Golf Diesel. It met our needs perfectly, and the seller was kind and helped us register the car. We named her after our

friend who saw the advert:  "Rosie"

Friends from England, Cara and Paul, came to visit over bank holiday weekend (the last weekend in August). We had

planned on taking them for a short ride on the canal and a lunch on deck before turning around and returning to the mooring.

We travelled 300 metres before breaking down (the impeller burned up) and so we had to pull ourselves back to the mooring.

Each of them took a line ashore and pulled us back to port!

Visit our new site for 2013 to current